The following describes the implementation of the protocol, which is designed to reward ETC holders for the long term holding of their coins, thereby creating a scarcity and reducing the actual “circulating supply”. We already have a working prototype and a live version in Callisto Network as well as we have UI and all the necessary descriptions and guidelines.

This proposal is fully compatible with ECIP-1017 since it does not affect the actual monetary policy, but only the distribution of emitted coins.

Cold Staking is not a consensus protocol!

1. Rebalance the influence of miners and stakeholders

There are many participants in crypto networks: miners, investors and stakeholders, developers and media resource owners. Miners control the network hashrate, developers and media resource owners participate in hardforks directly, while stakeholders often have not so much power. In addition, the wealth, the hashrate share and the influence of miners increase with time as they receive payments so that they can acquire new mining equipment in order to have more hashpower. In ETC, the share of long term stakeholders do not increase with time.

From a fundamental point of view, it is better if the situation is opposite because:

I believe that it is important to implement a protocol that will balance the distribution of influence between miners and stakeholders in order to form a healthy ecosystem for the Ethereum Classic project.

Cold Staking can push the price of a crypto asset higher and increase its upside potential.

The Cold Staking protocol is based on the “gym market theory”. You can find a description here. Cold Staking reduces the actual circulating supply by incentivizing long-term stakeholders to lock their funds in a special contract. The more funds are blocked, the scarcer the crypto asset is, the higher the price can become during the bullish phase of the market. The higher the price of a crypto asset is, the greater the incentives for long-term investors (cold stakers) and so on.

The proposal is to implement a protocol that will reward long-term holders for holding their coins:

The described system is self-balancing, which means that with the decrease of the staking reward the stakers will pull out, decreasin the total “Cold Staking pool”, thus increasing the share of the rest of the stakers, therefore their reward will increase until it will settle at the level where the system is balanced.

However, we should consider the viability of the system assuming that 50% of the total circulating supply will go into Cold Staking. This numbers are empirically proven to be essential.

Most of the stakeable crypto assets such as Dash or PIVX have 4 to 8 % of annual return rate. DASH or PIVX masternode requires a hardware that will participate in the generation of blocks, while Cold Staking do not require cold stakers to perform any actions apart from pressing “start staking” and “claim reward” buttons. The minimal Cold Staking return at 50% of total supply at stake should be comparable to the return of DASH or PIVX masternodes. With that being said I can conclude that 4% of the annual yield from Cold Staking is affordable for the viability of the system at the launch stage.

Staking round length should be equal to 27 days

Traders often make their decisions based on charts and candle closures. Therefore, it is better for them to have their coins available when the time to make a decision will come. That’s why I’m proposing 27 days interval.

If you deposit your funds at the beginning of a month then you will have the opportunity to claim it back right before the closure of the (1) week candle and (2) month candle at the same time. 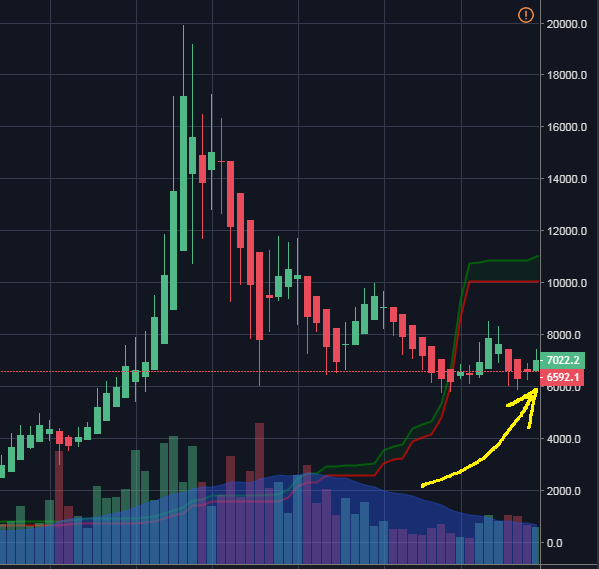 This protocol consists of two parts: (1) protocol-level implementation and (2) smart-contract.

Cold Staking is supported by Guarda wallet, Trust wallet and some other wallets.