This proposal offers a way to increase the finality rate without tampering with existing “hard” chain consensus functions or characteristics, and to do so with minimal negative side effects.

As a successor to established chain reorganization arbitration, the following logic should be added.

The sinusoidal function should be used to derive the “anti/gravity” of a proposed chain segment. The condition function works to derive the necessary total difficulty ratio parameter, comparing it against the antigravity output.

See References for what I’ve found on the topic.

The sin function uses constant parameters period = 2pi/8000 and amplitude = 15, the values of which are reasoned as follows.

The period value of 2pi/8000 causes the peak of the sin wave (and ultimate ceiling) to occur at 25132 seconds (approximately 7 hours). This falls in between the rates of the previously considered exponential functions. The “ramp up” domain (nearest x=0) sees a flattened curve, yielding a more generous lenience for competing short segments. The sin curve eventually intersects the original exponential function at about 900 seconds (15 minutes) at about y=1.09.

The amplitude value of 15 causes the peak to occur at (2*15)+1 = 31. This value means that the maximum “antigravity” an attack will face is a 31, where the proposed chain would need a total difficulty 31 times that of the chain it would replace.

These values were chosen for ETC with the following assumptions and reasoning.

An bounded exponential function would work in much the same way, although it would not have a continuous ceiling transition and would, in a far-edge case, present an exploitable focal point of vulnerability at that transition. 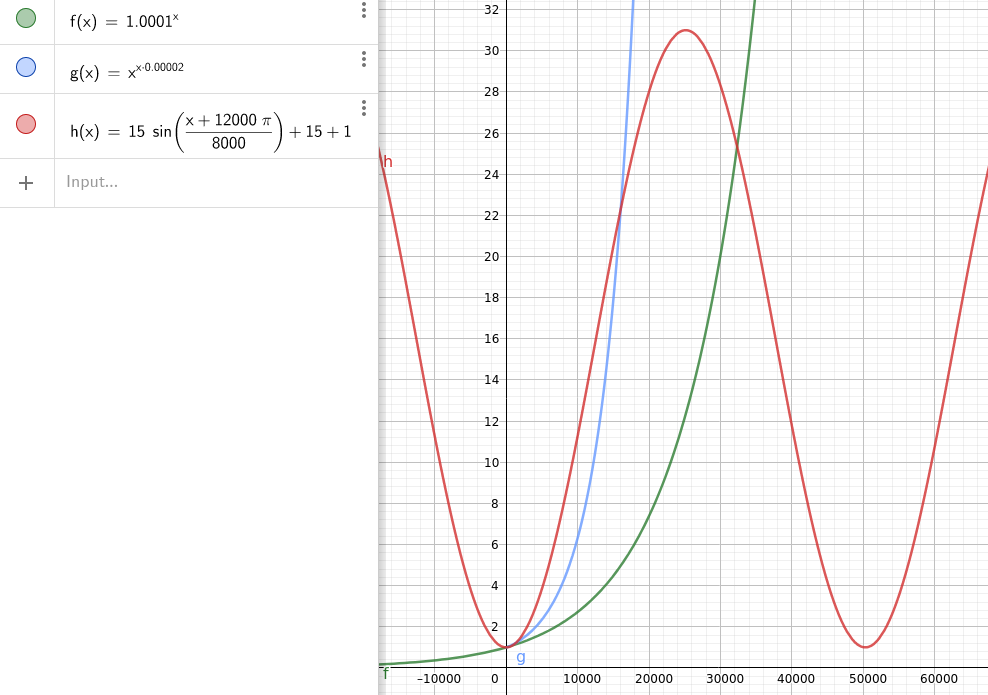 The graphs below show a 200 block chain accepting, sidechaining, or rejecting reorganizations of varying relative difficulty and length.

This feature does not require a hard fork, but the network stands to benefit and avoid risk with majority coordinated acivation.

A further alternative is demonstrated with a cosin function as follows, which, being squared, has an even flatter “ramp up” section. However, since difficulty adjustment is discrete and the primary case of consideration in this context is one of equivalent difficulty, efforts toward an ultra-low antigravity product seem well-intentioned but practically ineffectual.