ECIP 1108: TABS: An Experiment with a 2-Dimensional Consensus Scoring Protocol

Use a heuristic of chain state capitalization as a 2nd-dimension factor in consensus arbitration to improve normal finality rates and increase the cost of abnormal private chain production.

State Finality Is Low and Slow

This proposal intends to increase the cost of producing a private, competitive chain segment, which is characteristic of double-spend attacks. It aims to improve finality expectations by increasing the cost of attack, while maintaining existing assumptions and incentives associated with the incumbent proof-of-work protocol.

This specification is defined as a modification of the general,1 currently existing canon-arbitration algorithm, namely “Modified GHOST,” currently in use on the Ethereum and Ethereum Classic networks.

Total Active Balance Synthesis (TABS) is a positive scalar integer. Generally considered, it provides a measure of currency capitalization over time for some chain state.

It is defined to approach the median aggregate balance of all transaction-originating accounts for a blockchain of some length. It is denominated in Wei.

TABS is a “synthetic” value derived from a “raw” Total Active Balance (TAB) value of any block and, recursively, the TABS value of its parent block, much like block difficulty and gas limit.

The TAB value of a block is the sum of the balances (at the parent block state) of all unique transaction senders in the current block.

Pseudo-code is provided as:

The TABS value is defined as follows.

An adjustment denominator r is defined as 4096.

From these definitions, the TABS algorithm for a block numbered n, written as TABS(Bn), is as follows:

Pseudo-code is provided as:

This algorithm is expected to yield a value which approaches the blockchain’s median TAB score.

The incumbent primary “consensus score” is total difficulty. This value is defined as the sum of block difficulties for all blocks in some segment, as:

This proposal modifies the consensus score attribution as:

Like total difficulty, this value is still summed across a chain segment of any length to yield a total consensus score value.

With this syntax, both the current and proposed arbitration conditions are defined to prefer any chain state with the greatest “consensus score.”

In the case of ties, subsequent protocol canon-arbitration conditions are preserved as invariants, namely (and in this order):

PoW resilience against double-spend attacks depends on an assumption that no entity controls more than the “honest”/public network’s hashrate over some time. So the respective difficulty values over time (eg. 44%/56%) are compared relative to an equilibrium value (50%/50%). Difficulty values over time in excess or deficiency of the equilbrium represent competitiveness; for good, or for evil.

The logic of this proposal depends on an additional assumption that no entity controls more than the network’s TABS value in capital over some time. This is another equilibrium value.

For example, while maintaining an equivalence in consensus scores, a relatively greater difficulty value lessens the demand on TABS. 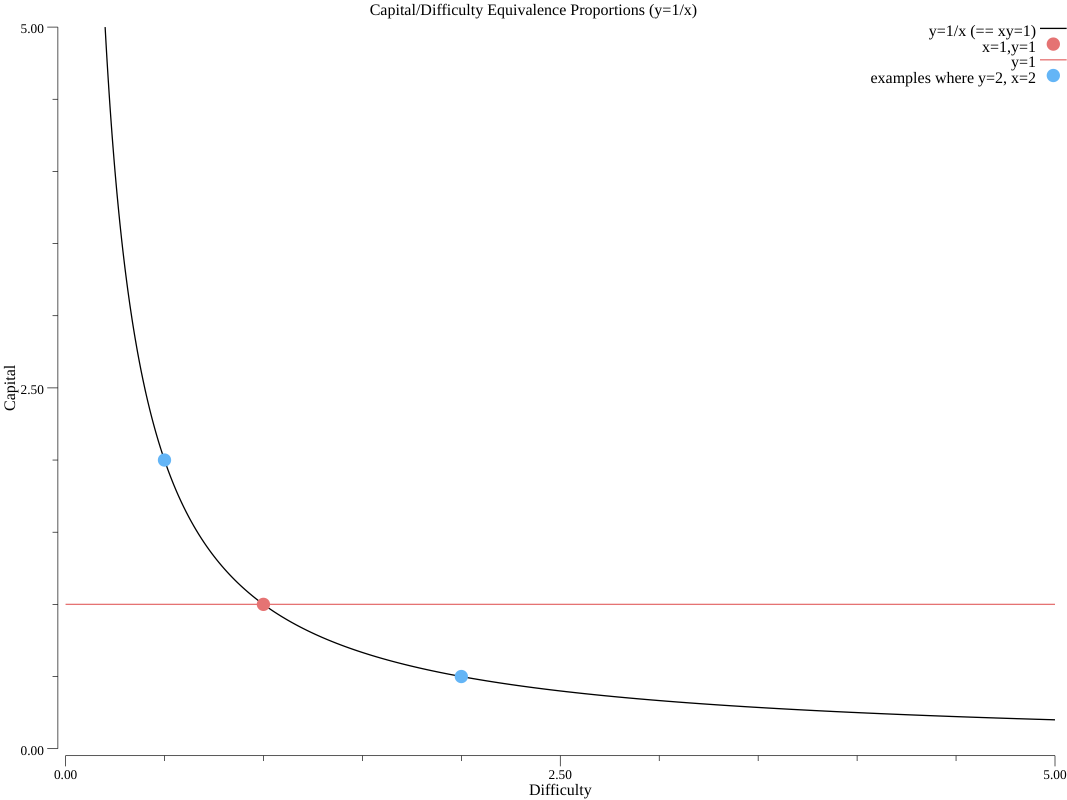 An adjustment denominator r is defined as 4096.

An adjustment factor of 1/4096 is chosen relative to the incumbent minimum difficulty adjustment factor which is 1/2048, and represents an intentionally conservative impact on chain production race probabilities and incentives.

The potential rates of change for difficulty are greater (faster) in all cases than those of TABS. 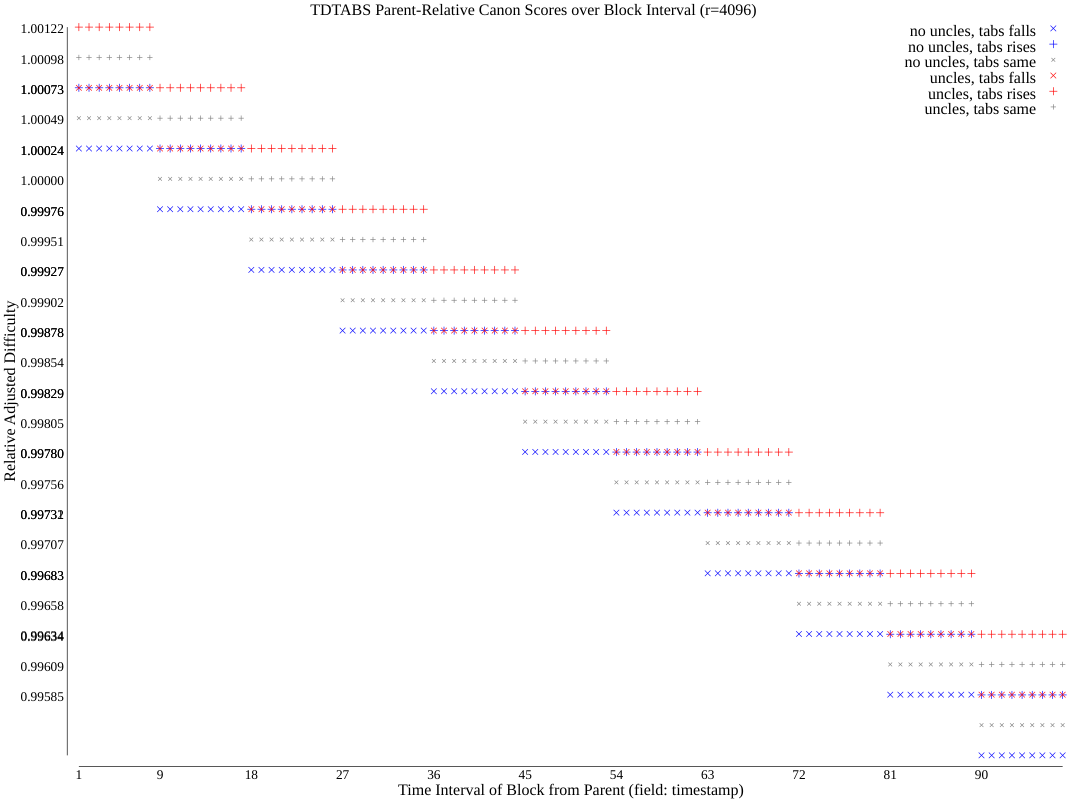 The viability of a PoW-based network depends vitally on the competitiveness and fairness of the PoW race. Linearity (actually sublinearity) here is the goal; 1 GPU : 1 vote/gamble/point/token/whatever.

Upon the availability of a potentially canonical block to some miner, they have two strategies: ORPHAN or ADOPT. Because we assume that greed is a reliable and optimal strategy, the miner should choose the more probably profitable option. To ORPHAN the proposed block means they continue work toward a competitive sibling block. To ADOPT means they begin work toward a child block.

If their balance is insufficient to beat the TABS of the announced block, clearly the incentives of the incumbent PoW race are preserved as invariant and the miner chooses to ADOPT. This covers about 50\% of the cases.

If their balance is sufficient to beat the TABS of the announced block, how do they model their probabilities for the ORPHAN or ADOPT strategies?

Since their expected TABS consensus score is differentially, at most, +1/4096 of the proposed block, they can still achieve probabilistic equilibrium with the incumbent race given only 4095/4096 of the otherwise necessary hashrate (representing the likelihood of their PoW solution discovery).

As above, the viability of the game on which the network’s state depends is hinged on the relationship of invested capital share to an expected and realized share in canonical block production.

Empirically we are lead to believe that the distribution of Ethereum and Ethereum Classic’s mining interests are long tail-type curves. A few interests control the majority share, with the democratic majority sharing the leftovers.

Lets assume that, like most things, it won’t be distributed evenly, and that “the rich get richer” is at least a working guideline for now.

Another variable we need to build context with is the share of miner-exclusive (“private”) capital relative to network-available (“public”) capital. If public capital dwarfs private currency capital, then the role of private capital diminishes against an assumed randomness inherent in the aggregated public balance.

Plots are provided below comparing views in this light for Ethereum and Ethereum Classic. 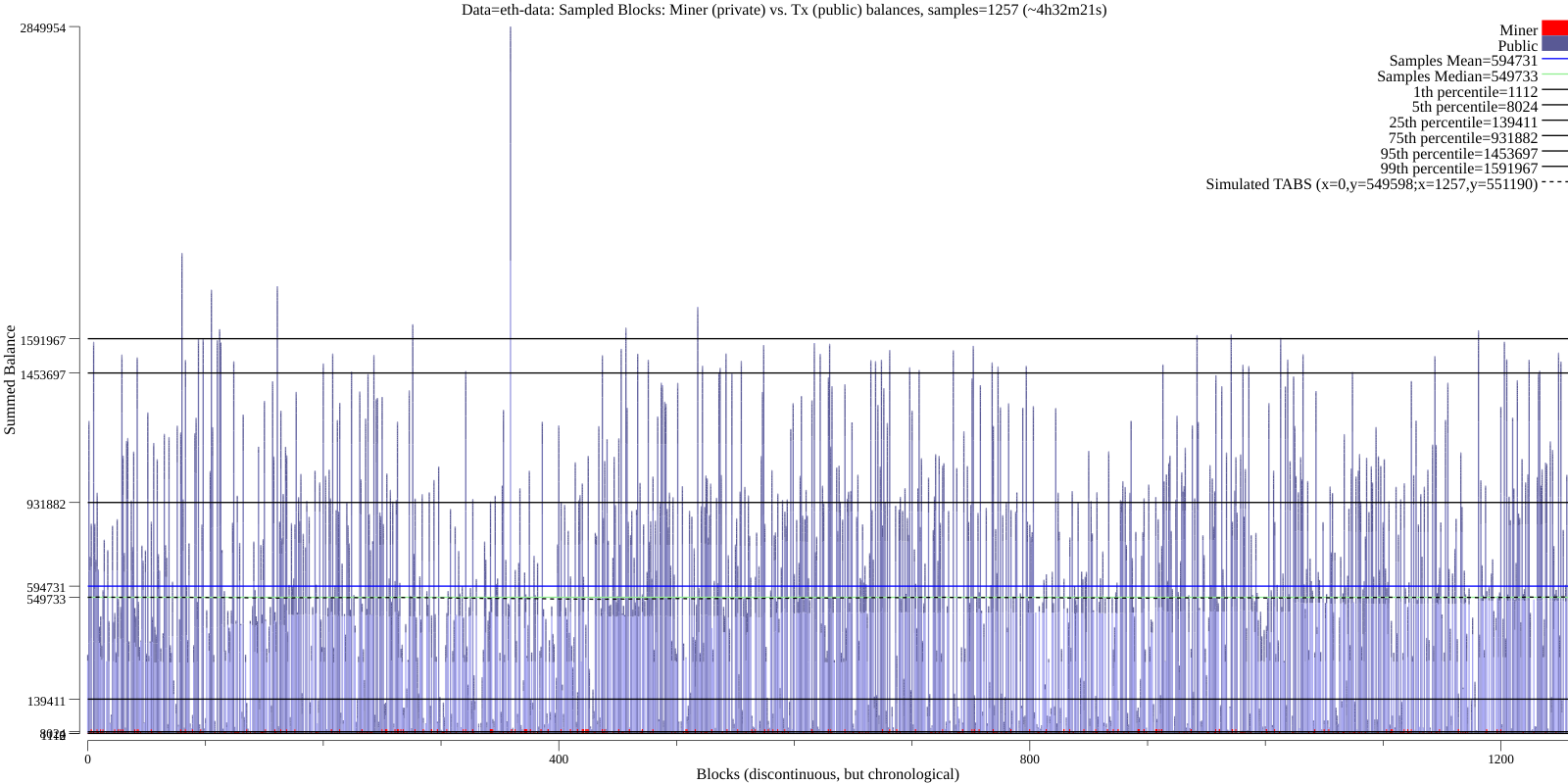 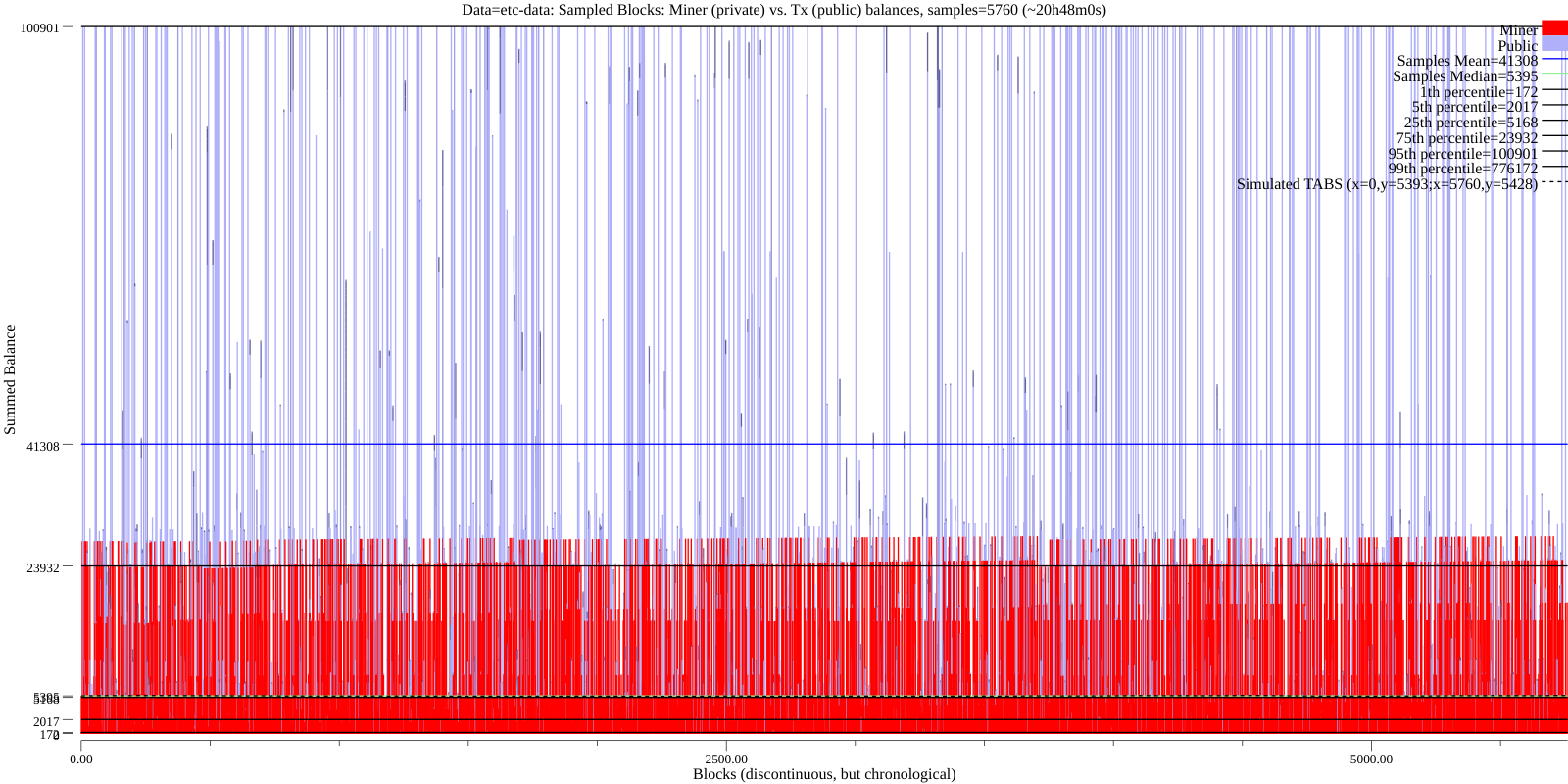 The rate of the network’s production of orphan blocks (sometimes recorded as uncles) is expected to drop because the expected rate of objectively decidable (non-tie, “asymmetric”) block competitions is expected to rise by around 50\%.2 The precise value of this expecation depends on the distribution of miner-available capital rates relative to the distribution of miner hashrates.

Lessening the production rate of non-canonical blocks is, by definition, an increase in expected network state finality.

The proposed algorithm “synthesizing” TABS is an implementation of a median-seeking algorithm.

From this, and by definition, we expect that eventually for some set of blocks, roughly half will have TAB values above, and half below the resulting TABS value. However, since the block authorship per miner is not equally distributed, the TABS score will be weighted more heavily toward more prolific miners. The scale of this weighting will depend on the ratio of the aggregate balance of public transactions relative to any balance represented exclusively by some miner.

Miners can include “local” transactions on their own behalf at no currency cost, but at the opportunity cost of the inclusion of a revenue-generating transaction.4

Miner participation in the TABS competition is expected, since expected block revenues are driven, in part, by the competitiveness of the capital they represent on their own behalf.

Since a miner can and should (optimally) represent their self-interested capital as a single transaction in the blocks they mine, they are expected to at least sometimes cannibalize one balance-transfer transaction’s worth of block space (the minimum, currently 21,000 / ~10,000,000 = 0.02%) in their own interest.

Miner-interest transactions can be inoperative. Miners don’t have to actually send any balance to anyone. Just a signed transaction to themselves, for example, where they recoup the gas fee (as the credited coinbase) or charge themselves a zero gas price.

Heuristics about PoW finality expectations depend on “off-chain” variables, like universally (on- and off-network) available applicable hashrate. For example, hashrate from another network, networks, or any other applicable technologic domain like computer gaming; the state of the art of the work itself; the applicable market(s) for electricity, etc.

Unlike fuzzy estimates about (potentially) globally available hashrate relative to the PoW network in question, all of the functional TABS protocol parameters are observable as on-chain values, namely balance distribution and overall currency supply.

An adjacent proposal “AHA Typed Transactions” is listed as a dependency, which should be understood as an encouraged, prototypical mechanism for developing a way for transactions to be dependent on some chain state at the transactor’s discretion, and in expectation that this chain state (presumed to be a public one) is different than any hypothetical private state.

The motivation for this is to encourage a difference of TAB values between public and private chain segments. Transactions which depend on a chain state exclusive to the public chain count differentially toward the aggregated public TABS value, which increases the cost of a double-spend attack.

However, this is not completely theoretically necessary.

Miners can include “local” transactions arbitrarily in blocks they mine (using existing and common APIs and clients). Transactions made in this way already meet the criteria for differentially exclusive transactions, albeit imperfectly, since their differential exclusivity (“locality”) is limited to the pending block because the transactions, once published in the public chain state, become available to any competitor.

TLDR; theoretically, existing APIs for “local” transactions can sufficiently differentially benefit the public state, but can do so only to the differential magnitude of a single block, and, as such, are practically insufficient.

I have written a couple programs that I’ve used to simulate and observe chain production characteristics.

I would love review, feedback, and collaboration on these.

TAB and TABS value estimates can be derived retrospectively for Ethereum and Ethereum Classic chains.

At the time of writing, and with limited sample sizes, I estimate TABS values as follows.

Further efforts toward current or retrospective analysis of real-life PoW chains, not limited to ETC, is welcome.

A hard fork would be required.

An attacker could promote high-gas, low-balance transactions in the public pool, attempting to lessen the public TABS value for some time.

This strategy would be observable in real time by the public.

An attacker could challenge the assumption that no entity controls more than the public TABS value for some time. The value of TABS relative to current supply and its account distribution informs this risk model.

This attack, like a pure-PoW double-spend attack, would be invisible until published.